1976 – New Church Schedule, New Property, And The Life Of A Pastor’s Wife 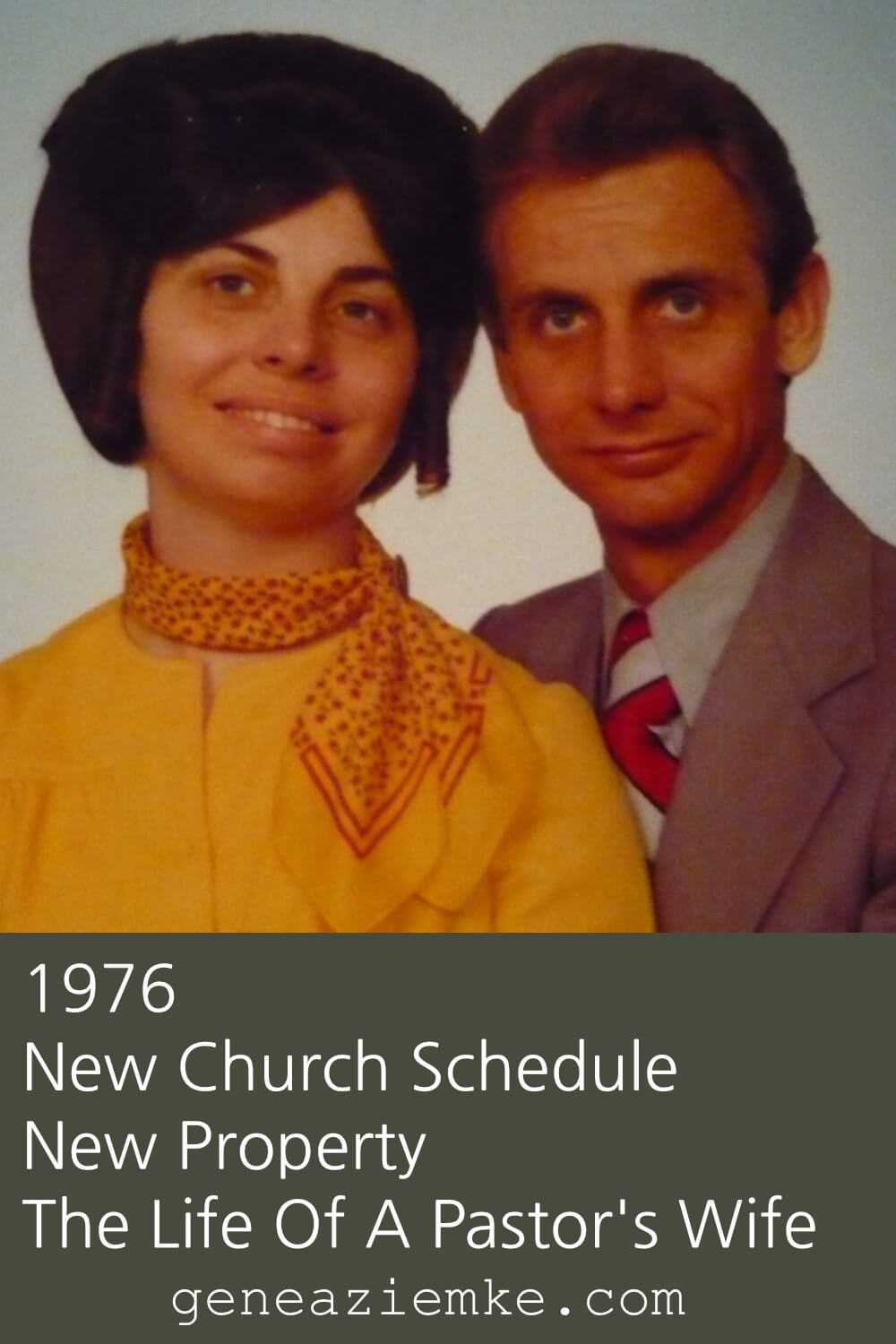 1976 – New Church Schedule, New Property, And The Life Of A Pastor’s Wife

We started 1976 hosting our second annual Board dinner with the help of the staff wives. The Advisory and Trustee Board and their wives numbered about 30, of which 25 or 26 were able to come. This took place in our living room at 1818 South Meridian. We put three 8-foot tables end to end decorated with flowers and candles and had a fire going in the fireplace. The staff wives helped with china and goblets. We had a menu of fruit punch, tossed salad, baked potatoes with condiments, corn, creamed peas, fruit salad, flank steak, homemade rolls with jelly, and beverages of ice tea, or coffee. For dessert, the choice was pecan pie or cheesecake. The women stayed and helped with dishes and visited while the men had their Board Meeting.

When Dave and Nancy got married, our family took a 10 day California vacation to include attending their garden wedding in Turlock. We enjoyed the Redwoods, Marine World, Universal Studios, Knott’s Berry Farm, Disneyland, and Hollywood. We visited my Aunt Iva’s family in the Simi Hills, friends John and Marilyn McDonald, and Joann and Ed Albin in Eureka, and the Shoemakes in San Jose. We checked out a couple of well-known churches, Dr. Schuller’s Garden Grove and Melodyland (where we attended a service). This was just after a fire in Santa Barbara had destroyed 200 to 300 homes and we saw some of the devastation. Gene preached at the Turlock church on Sunday morning and Haney’s church in Stockton Sunday evening.

It’s almost unbelievable the amount of company we had, both at church and in our home for meals. Time and space would not allow me to list them all. Gene also traveled quite a bit for his work as District Youth Director. In January, he was invited to take part in a conference at Hanby’s church in Texas, along with 11 other speakers. He flew down for the meeting and bought Kenneth Phillip’s 1975 black Lincoln 2 door with 25,000 miles on it and drove it home.

In February, 1976, we changed our church schedule to having a Sunday afternoon service at 2 p.m. rather than both a.m. and p.m. services. That gave us more time for evangelism and inviting new folks to church. We encouraged our folks to invite new people to their homes to get acquainted in the evenings after church for dinner or snack. Plus, those that went to other churches could visit and not miss their own service. It was also a blessing to families with children who needed to get to bed early on Sunday night. Our services weren’t the short one and a half hour so standard today. The afternoon services could easily last until 5 p.m. We were averaging about 500 each service. The choir sang beautifully as well as small groups, trios, etc. There was a true family atmosphere.

We were feeling so blessed. There was a very special time of blessing for me when, at a church service, I released myself to dance before the Lord, back in the overflow section of the church. I told the Lord then, “If you never bless me again, it is enough.” In later years, as we went through struggles, I felt God tell me, “If you never work for me again, it is enough”. It gave me a sense of peace and release from any guilt of not being able to contribute my efforts to the work of God. God loves us as we are and not for what we can do. Though in both instances, God has blessed me again and again, and I continue to desire to be effective for the kingdom of God.

We had only been in the new church at 1818 S Meridian in Puyallup four years when Gene felt it was time to look for more property to expand our outreach. His “MO” Modus Operandi had always been to ‘Get out on a limb for God’ and God would meet us there. He felt the need to not be hemmed in but ready to expand with our growing congregation. He traveled the main highway through town looking for property. Once again, he knocked on doors, even though the property was not listed for sale. At 144th and Meridian there was a small farm on 40 acres. The woman at the door said they had received multiple offers to sell but were not interested in selling. However, as he spoke with her and told of his desire to build a church on the property, she thought it over and eventually decided to sell. The price was $7000 an acre. Forty acres made the total $280,000. It was a great buy. We had a long term plan but first our church at 1818 S Meridian would have to be sold. We had the $20,000 down by the help of the Lord.

We hoped to sell our church and build a gymnasium at the new property and have church in it until we could build a sanctuary. Plans changed as you will see.

We started a Christian school in our 1818 S Meridian church with Bill Willoughby as the Principal and others from our church as teachers. Sadly, it only lasted a year because of staff conflicts.

Quick Quotes from a letter I wrote home May 5, 1976:
Brad got his glasses on Friday and he has to admit that even though he didn’t want them, he can see better. He still didn’t want to wear them where people were around and especially not to school where he thought the kids would make fun of him. But he is a shrewd businessman you know, and so I offered him a nickel an hour for every hour he wears them this week. I didn’t even need to prod him to wear them to school. He said a couple of kids called him four-eyes but the one he was really worried about just said – “Well some people have to wear ‘em and some people don’t”. Ha. He told me to wake him up at 7 this morning and that he was going to wear them all day.

As I went by his room at 7 a.m., I just said, “Brad, it’s seven o’clock”. A few minutes later as I came back by he was laying in bed propped up on one elbow and could hardly keep his eyes open but he had his glasses on! Ha-ha!

More Quick Quotes from a letter I wrote home on May 5, 1976:
Our next appointment at the orthodontist is just to talk about what exactly will be done for Brenda’s teeth. She is like Brad was about the glasses – she’ll take head gear but not braces and says she looks better with crooked teeth. Isn’t there always something a mother has to deal with…

Quick Quotes from a letter I wrote home on August 3, 1976:
Gene had some meetings in Yakima. I drove the kids over and met him half way home at a little resort spot on Crystal Mountain where we just hiked in the evening and then rode horses on mountain trails the next morning before coming home.

Brenda is sitting here at the table busily learning the second chapter of Acts. She really learns it pretty fast. She wants to go to youth camp so bad but it’s more expensive again this year, $27.50. Gene told her he would give her $20 if she learned the whole 2nd chapter by camp time. She has about 12 days left and is on verse 30 with 17 more to go. She wants to be my maid and earn a dollar a day for the rest of the money.

Bridget is still afraid of dogs. She wrote a thank you note to a man who gave them free tickets to a circus and he thought it was so nice, he wrote her a note back and gave her a $2 bill and wants to give her his Cockapoo which his mother can’t have anymore. Ugh! She doesn’t want it of course.

I think I’m getting old. Some days I just get real nervous about a lot of company or lengthy stays, and other times I’m as calm as a cucumber.

Quick Quotes from a letter I wrote home on November 4, 1976:
My weeks seem to go something as follows:
Monday – quick clean the house from weekend traffic; do all the laundry, grocery shopping, personal banking and sending bills, spend 2 to 4 hours doing the church banking, and family night in the evening (something with the kids).
Tuesday – I work about 6 hours in the church office, do my ironing about 2 hours, and try to accomplish a home project in the evening.
Wednesday – Wash my hair first off. Spend most of the day working on Women’s Ministries, visitation, calls, library, etc and church in the evening.
Thursday – Another office day until 2:30 doing filing etc. I take Mom Ziemke to work, try to do something at home in the evening such as sewing or closet cleaning, etc.
Friday is supposed to be my full day at home to deep clean, again do the laundry, take Mom Z to work, and prayer meeting in the evening.
Saturday – Do the church bulletin board with “Family of the Week”, “Youth of the Week”, and new family introduction. Usually that takes at least 3 hours. Wash Bridget’s hair. Plan for Sunday and a myriad of things that accumulate.
Sunday – Comb my hair, make a big breakfast for the family. Prepare a big supper in advance for company. Get everyone ready for church and go about 1 p.m. for service at 2. Have company for supper after church.

This is all besides helping with homework, working with Bridget on piano lessons, having unexpected company or taking someone out to lunch, etc., etc. It sounds quite scheduled, but I would never get it all done without a schedule, and it does get interrupted often.

This was the bicentennial year for the USA. We again drew names among the Mincers for Christmas and decided this year we would give home-made gifts. I Tole painted a sort of farm scene on a board for my Dad’s farm equipment office.

This month, December, 1976, we had been in Puyallup 10 years. We celebrated by having special services with Brother Maki from Wisconsin, Friday through Sunday and the Lanny Wolfe trio for a Saturday night concert. We held the concert at the Tacoma Bicentennial Pavilion, rather than at church, and about 1000 people came. The church gave us our first microwave oven.

By the end of the year, we hadn’t made any more progress on the new 40 acre site other than having a master plan drawn up. In years to come we hoped it would include a new sanctuary and office complex, school pods, a gymnasium with swimming pool, retirement home, and parsonage.

Previous: How Ya Doin’

Next: God Is Willing To Forgive