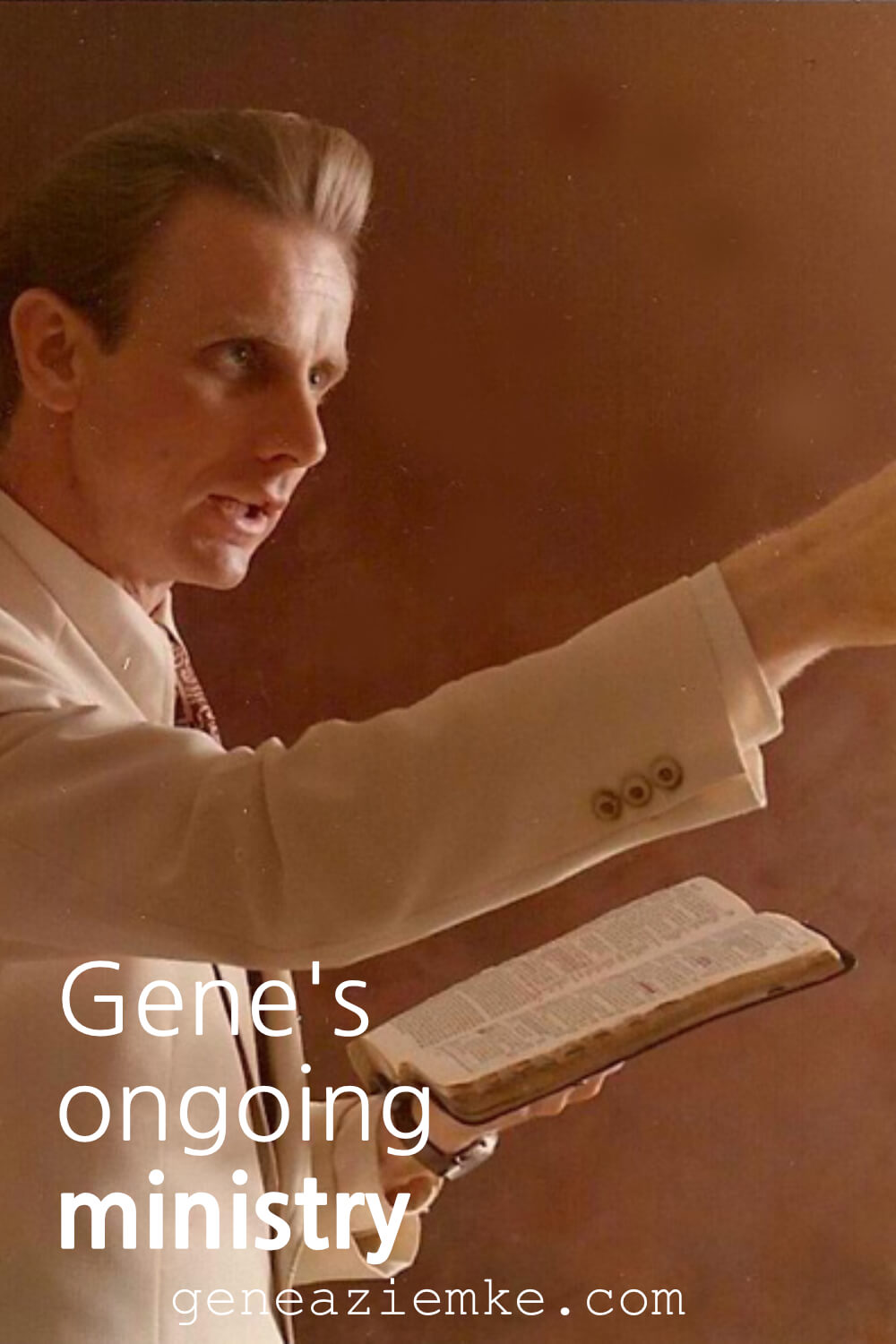 The Man of God.

He is not a perfect man, but he is a man of God. From a child, he has prayed and read the Scriptures daily. He prays about each sermon he is to preach until he feels it is the right one for the time. He prays for his family members, our children, grandchildren, and others that the Lord brings to his mind daily. He brought a church of 50 in attendance to an average of 700. He spearheaded the building of two churches and an amphitheater. He knows how to step out in faith … and get “out-on-a-limb” for God.

In the course of pastoring in Puyallup, we were in three different church buildings. The first was at 423 2nd Ave NE (Jesus Name Pentecostal Church), the 2nd at 1818 S Meridian (The World of Pentecost), and the 3rd at 144th and Meridian on the South Hill of Puyallup (Meridian Christian Ministries).

After we resigned from Meridian Christian Ministries, Gene didn’t Pastor a church again. Many people then, and later, voiced their opinion that “the best was yet to come”. Gene didn’t want to preach again at that point, nor as he says, have anything to do with another human being. When he was feeling ready to preach again a few years later, times had changed and there were few to no opportunities to preach, barring starting his own church. Evangelists no longer preached every night for a week or two. Pastors felt the need to have their own voice heard on the one or two services a week. Most churches had their own Pastoral Assistant if there was a need.

Gene was always a volunteer and, eventually, came on staff at New Heart Worship Center, later renamed, Overcomer Covenant Church. His role there was primarily Pastoral Care (visiting folks in rest homes, hospitals, and prisons, officiating at funerals and weddings, and counseling). He did very little speaking at regular Sunday or Wednesday services in our home church, maybe once or twice a year. However, he once counted 65 funerals he officiated or took part in over a 5 year period. Over the course of a dozen years, he preached at a little mountain church in Glenoma, about an hour away, two or three dozen times. He also spoke at other churches in Washington, Idaho, and Montana.

He was invited to speak at a preacher’s conference in a different state and was sure this was God ordained but, after the fact, felt he failed and was not well received. It seemed those folks were still used to the old fashioned, high-pitched, loud, fiery, gasping-for-breath type of preaching, which he was not. However, God reminded him of the one former Baptist preacher who attended and was revived from his depressed state. It seems, the Baptist Pastor had received the gift of the Holy Ghost and taught it in his church until he was ousted for just that. He and his wife were at a loss. For years, they had visited large churches where they could sit in the back and not be noticed. After the conference, he kept in touch with Gene. He had come out of the depression and was pastoring again where he was free to preach and teach the Holy Ghost infilling. Gene finally said, ”If Jesus ‘must needs go through Samaria’ for just one person, who was I to say the trip to that conference was a failure if it reached just one.”

For two or three years, beginning in 2004, Gene held Sunday night meetings the first Sunday of each month at our church called “Sunday Night Revival”. Old friends from our former church attended, along with a few new people, and folks from New Heart. That ended when a new Pastor came to New Heart in 2006.

The church we attended, New Heart Worship Center, had outgrown its building. It took years to get the permits to build from King County. Finally, the new building became a reality in 2005.

Gene is now known as Pastor Emeritis. He still attends the prayer meeting each week-day morning and leads it on Fridays. At this writing, he has been invited to fill the pulpit six or more weeks for a pastor on sabbatical this summer. He would like to do more of that. Will that open more such doors, or will it be the last sermons preached? Gene’s voice is failing – half of his vocal chords are not working.

Next: Salvation Is All You Need