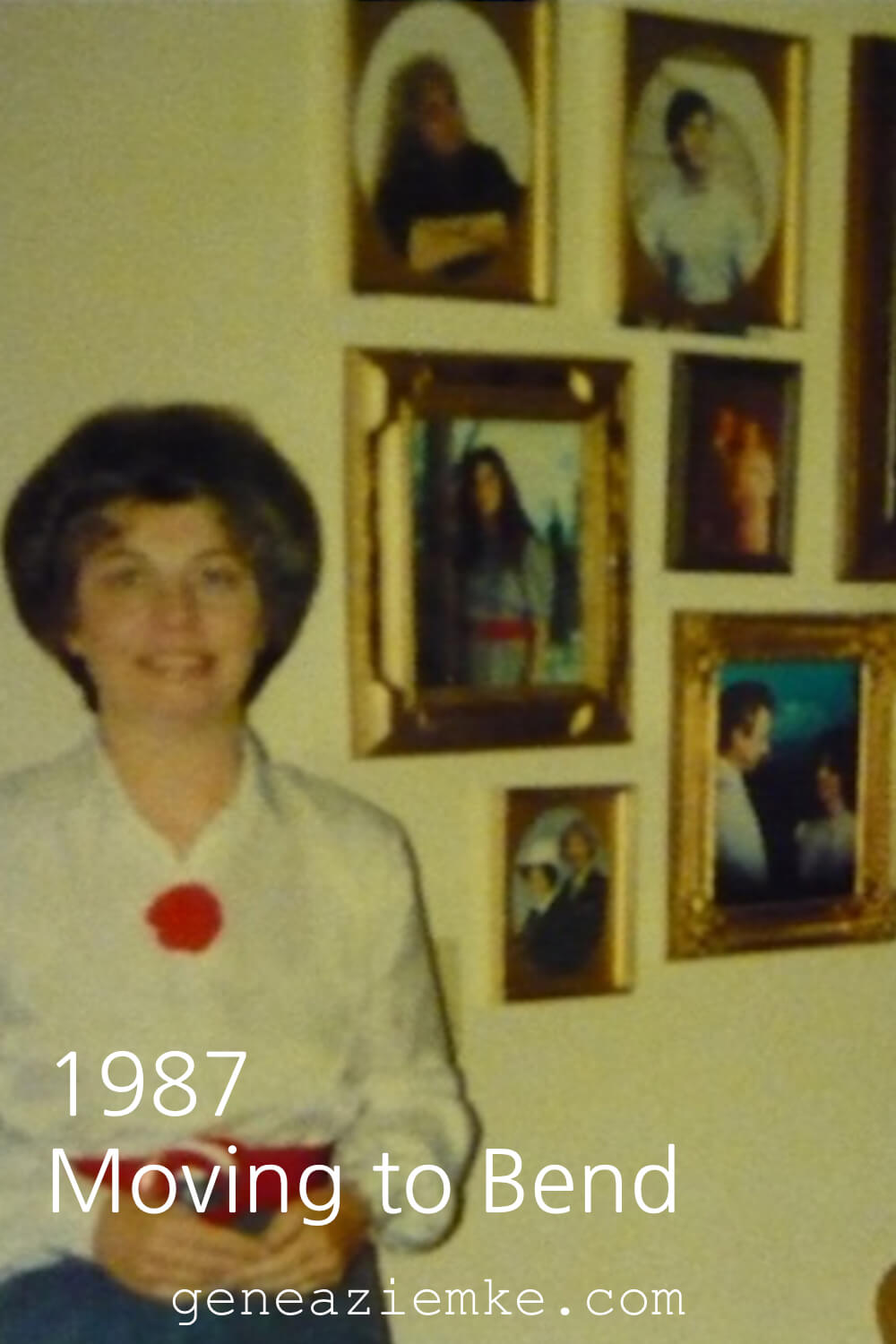 In June, 1987, Gene had had enough of living in “a giant-sand-box” as he called it. His work was out-of-doors and so hot. He missed the mountains of the Northwest and wanted to move back. He had visited Bend, Oregon, and decided that would be a good place for us to re-settle. God blessed him with a lot of sales in his Culligan water business in order to afford to move again.

We had sold the motor home so, this time, he purchased an older box van to move our things in. He drove the van and I followed him in the Plymouth Voyager. The van broke down a time or two. I felt sorry for him driving it without air conditioning or radio while I was in the comfort of my cool car with great music. Going through a couple of cities during rush hour was most disconcerting, especially when a car stalled in front of us on the curve of an overpass. We were afraid of being hit any moment.

Well, we made it to Bend. Gene had been bragging to me about how pretty it was there. We pulled into town and he stopped to come back and ask me what I thought, I couldn’t believe he had stopped right by a wrecking yard. It was nothing to be desired.

It was our 25th wedding anniversary. I had always thought we would have a great celebration at the church we pastored but we had left that wish behind when we moved a year prior. We made a short trip to see our relatives in Puyallup and Jeff and Frieda served us a nice anniversary dinner.

In Bend, it was warm during the day but cooled off quickly at night. In fact, it snowed on July 4 when we went to see the local fireworks.

It was nice we knew some folks in Bend. Norman and Betty Dillon pastored a little Pentecostal church there. Most churches were still having morning and evening services so we’d go to one in the morning and another in the evening and rotated with the Pentecostal, the Foursquare, and Cascade Praise Cathedral. We even visited the Nazarene church for their Easter Cantata.

We did enjoy living there. The scenery was very different from Washington. You could see far in the distance of the high desert. There was a lot of sandy and volcanic ash soil. Trees were short and rugged and not tall and stately like those in Washington. In fact, when we came back to Washington, we felt sort of claustrophobic surrounded by tall trees.

There weren’t many places to rent in Bend. We finally located an empty house but there wasn’t a “For Rent” sign on it. Not to be deterred, on inquiring with neighbors, we found the owners were managers at the local mall and also had a yogurt shop there. We tracked them down and they decided they would rent, rather than putting it on the market to sell.

One thing that worried me about living in Bend was that there were mountains between us and Puyallup that were often snowy and icy. I didn’t like the thought of our kids coming to visit over those, especially because Brad liked to travel fast.

The house was in a nice neighborhood but not furnished like the one in Florida had been. Jeff and Frieda gave us their old tufted gold velvet couch and an area rug. We bought a glass top dining table with oak base and 4 matching chairs on rollers, upholstered in brown velour. I don’t remember where we got all of the beds but we had a queen sized in our room. Bridget had a bed in her room and we put two single beds together in an upstairs room to use for guests. Our room had a master bath, so the main bath became Bridget’s.

Brad took this move as his cue to go back and live in Puyallup. He got a job working with lumber at Barbee Mill, where Brenda worked in the office, and stayed with Jeff and Frieda until he could get his own apartment. We gave him a 21st birthday party at Pietro’s Pizza in Puyallup.

Brenda and Brad spent Saturday together – hope she unwound a little. She’s been so busy. They were going to a swap meet – to dinner, etc. just to get together before she leaves Tuesday. On Friday, she had a bloody nose at work for an hour and 20 minutes. When it finally stopped, they took her to the Dr. She had 102 temperature and he thought a combination of nerves and a virus brought it on. He gave her something to build up her blood and an antibiotic. Hope she’ll be okay on the trip.

I guess Gene and I have both been kind of nervous or something lately, like we should know what the future holds, but we don’t.

Brenda and the boss’ daughter were to travel for the company, Barbee International; branching out into other export/imports.

Brenda had a good trip to Hong Kong and Taiwan. She ate some foods that I would never had eaten and would never have thought she would; such as raw chicken, fish fin, goose liver soup, pig knuckles, and hen claws. They cut the trip short as the boss wanted them back to talk to some client. She was anxious to get home to her own bed and food.

Bridget has gone with some friends to a football game tonight. This is a big one because Mountain View High is playing Bend High. Her school is a couple of miles by road but actually just through the woods from our house. I can see the big lights and hear the cheering even as I type.

She had her wallet stolen from her first job here in Bend about 2 months ago. She lost all her old friend’s pictures and was heartsick. Today, a hedge trimmer at the local Methodist Church found it intact, except for the money, of course. She was thrilled to get it back.

Brenda has a special friend that she feels will be the one she’ll marry someday, Brett Habenicht. She met him through a girl that used to work at Barbee who arranged a blind date for them when he was home on leave from the Navy. They spent a lot of time together in the 2 weeks he was home. Then he came to see her from where he was stationed in Virginia a couple of times since then and will be coming again at Thanksgiving.

Bridget is in her senior year of high school here in Bend and is working part time at the Jean Machine (a casual clothing store) at the Mountain View mall. She has lots of friends, her own car, a 1981 blue hatchback Mustang, and seems to be getting along fine.

Bridget also worked some at the Pickle Barrel Deli. She had had a hard time leaving Puyallup when we moved to Florida but got new friends there and then didn’t really want to move to Oregon for her senior year. However, she again made some good friends. One in particular, Lisa, became a life-time friend who later moved to Portland, got saved, and married a young man from City Church there.

I got a job working for the State of Oregon, this time for the Department of Justice, Support Enforcement Office. The pay was $6.46 an hour. We thought that was pretty good for the state at the time. I did office work and sometimes witnessed paternity blood draws at the local hospital. That was before DNA testing had become available. The father and baby both had to have blood drawn. Initially the work was ¾ time. I volunteered ½ day a week at the Senior Center meal site. I enjoyed community volunteerism and was surprised at the attitude of the other volunteers when they found out I was a Christian. Usually Christians don’t volunteer other than through their churches so they were surprised that I would help them.

I prepared some of the foods – slicing and dicing and prepping vegetables such as broccoli.  Setting the tables and checking people in were among my duties. The small table they had for checking people in was scratched and ugly. I took it home and refinished it. I painted the legs flat black and sanded and stained the top. It looked so much better. It wasn’t long though, that I was requested to work full time at my office job and had to give up volunteering.

It seems like several people we’ve known are now busy in a work of God not associated with the UPC. The more we’re out and away, the more “narrow in scope” the UPC seems. There are many beautiful people there but they are not as effective as they could be. How can we honestly go to people and tell them about salvation and woo them to God and then begin to tell them how to please us (not necessarily God) in all our do’s and don’ts.

Gene worked selling copiers for the local office 3M store. He dreaded Mondays when it was time to start work again. He didn’t like trying to convince people to buy. It just wasn’t as fulfilling as “helping people”. We both had to take business trips across the Santiam Pass from Bend to Salem which could be treacherous in the winter.

It’s so peaceful at home this afternoon. The fire, visible through the smoky window of the wood burning stove, adds an air of warmth to the physically toasty room. The whistling wind disrobes the spindly trees of their last golden leaves and threatens to unwrap the lights that were so carefully placed in the branches only yesterday. It’s a perfect day for addressing Christmas cards.

Next: Let’s Not Pretend