Well, in the spring of 1950, Dad made the decision, bought the farm, and we made the move.  The church in Spencer gave us a going away party.  They gave the folks a nice mirror with a gold Hobnob frame and a lamp.

We had heard that the house was in disrepair and very dirty – even possibly had bedbugs.  The first thing we did was fumigate it.  The next day we went in and started cleaning.  There was a large upstairs room divided with a cardboard partition covered with wallpaper.  Lavonne and I pushed it over.  Everything was cleaned, painted, and papered and soon it became a comfortable home for our family of five.  Comfortable, except that it took about a year to get indoor plumbing.  The outhouse, just across the yard from the back door, was scrubbed and painted white.

Lavonne, into decorating, suggested that Mom should paint red rings around the two toilet holes, so she did just that.  Then Lavonne, forgetting the paint was fresh, was the first to use it.  I have a memory of seeing her bent over on the porch with Mom cleaning her backside with kerosene.

There were two big Mulberry trees in the front yard near the road, big Lilac bushes, and a patch of Tiger Lilies where the lawn sloped toward the driveway. There were several types of evergreen trees including a flat-leaf Cedar where Dad hung a rope swing with a wooden board seat from a high branch.  I eventually learned to hang by my toes from that branch, having hoisted myself upside down on the ropes.  There were also Box Elder trees complete with Box Elder bugs that swarmed during spring and summer.

The farm was run down.  The soil had been depleted.  Dad put on good fertilizer, rotated the crops, and put in contour farming.  That meant that instead of the rows running straight over the hills and valleys, letting the rain water run off the hills and absorb more in the valleys, the rows ran circularly around the hills.  Dad grew several crops including oats, corn, and clover.  He was pleased if the corn was “knee high by the 4th of July”. 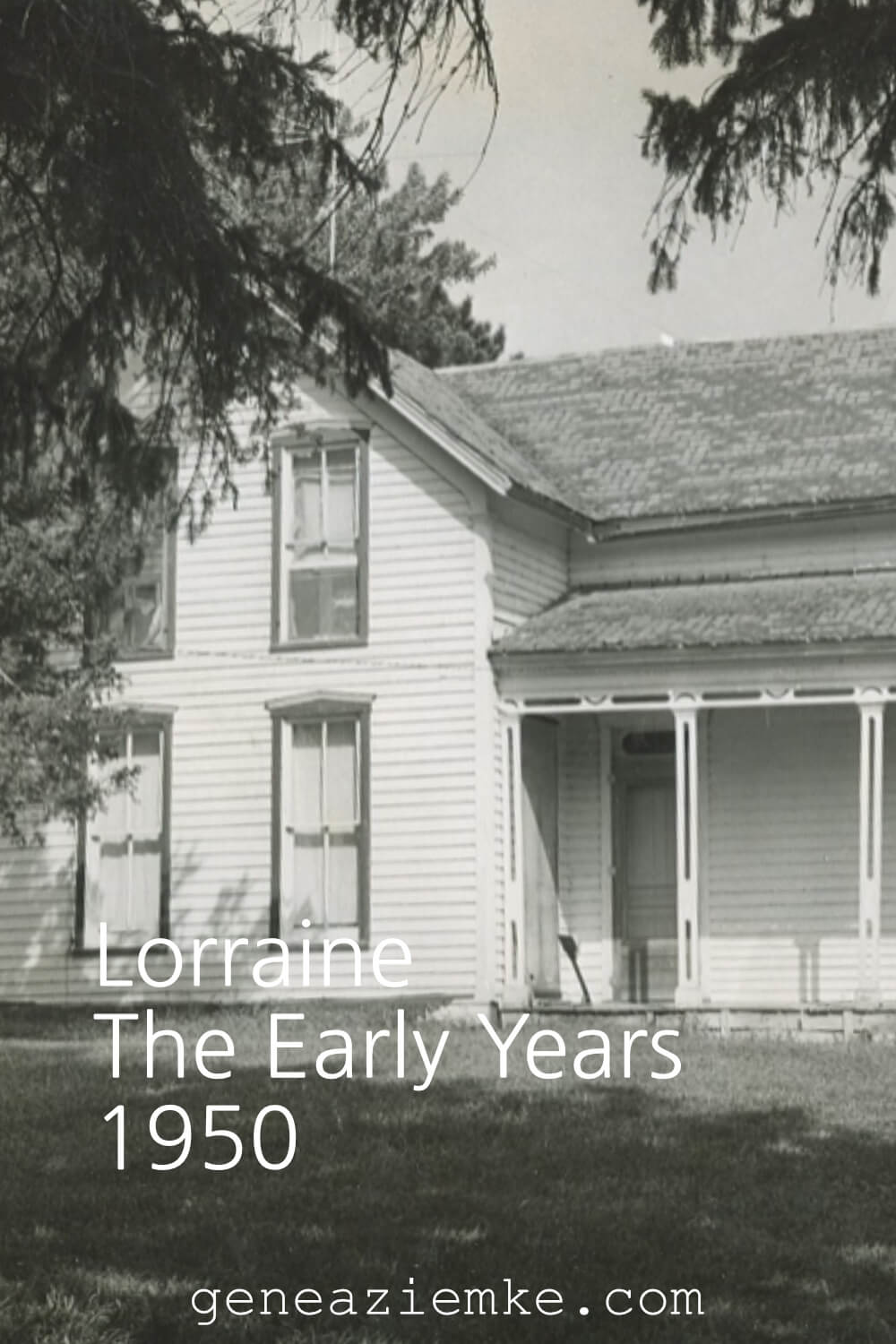 When Dad came in from work at the end of the day, he often asked if we girls would untie his work boots and take them off.  It was an honor in a way but, once off, we escaped the smelly feet as fast as we could.

While I was in third grade, not long after we had moved to Carson, I came down with Rheumatic Fever.  I don’t remember much about the symptoms that made Mom decide to take me to the Doctor.  Probably I was just lethargic.  It was determined that they caught it early enough and that I shouldn’t have any lasting ill-effects.  Mom made up a bed for me in the dining room and I wasn’t allowed to get up for three weeks, except to use the bathroom.  I loved jumping rope and missed that most of all.  At the end of three weeks, Mom allowed me to stand and step over the rope – not jump it.  After I was well, I noticed when kids played in the school gym, others would get red in the face, but I turned white.  I do have a heart murmur as do a lot of folks but it may have been there prior to the Rheumatic Fever.

Another time when I was sick, it seemed a hard flu was going around and I had been stricken.  My stomach hurt so badly, I didn’t want to eat when the family was called to dinner and was crying with pain.  My Mom called the family together and prayed for me as I lay on the couch.  I went sound asleep and when I awoke a few hours later, I was fine…healed.

If I was considered a sickly child, I didn’t know it.  My Mom never mentioned it to me.  In my teen years, my Uncle Wallace told me they had been worried about me.  I was a bit thin and had dark circles under my eyes.  Sometime in my childhood, I developed bowed legs.  Not too bad, but enough to make me a little self-conscious and to make me run my shoes over on the outside heel.  We never knew why.  Maybe my body didn’t assimilate the nourishment well, or it possibly could have been a touch of polio.

Lavonne and I had fun pretending an ear of corn was a doll and the long golden silks was hair.  Then there was the Hollyhock flowers that could be made into dollies with full skirts.

Carson was a small town with a population of 600.  The main street was just one block long with a post office, grocery store, hardware store, restaurant, and, I think, a feed store, and a pool hall.  Down along the highway were a couple of gas stations, a small restaurant, and another food store.  Dad liked to take the mile-and-a-half drive into town regularly to talk with the farmers in the restaurant – usually at breakfast time.  On Friday nights, we would often go into town as a family.  That’s when we got to spend our quarter allowance.  Some of mine would go for candy cigarettes.  There was never a desire to smoke, I just thought it was fun and they tasted good.

There was a ravine on the farm which ran under the little bridge on the road just down from the house.  City folks had begun using it as a place to drop off garbage and unwanted junk.  Dad stopped that immediately and hauled the junk away.  He hired the ravine dug out to form a shallow lake, let it fill with water, and stocked it with fish.  He even invited the townspeople to fish there.  Many times we saw little rowboats with fishermen on the lake.  Our neighbor boy, Sherman, found a dinosaur bone in the ravine on the other side of the bridge. Scientists were interested and it became a news story.

Find more of The Ziemke Story!