Settling Down And Baby Number Two 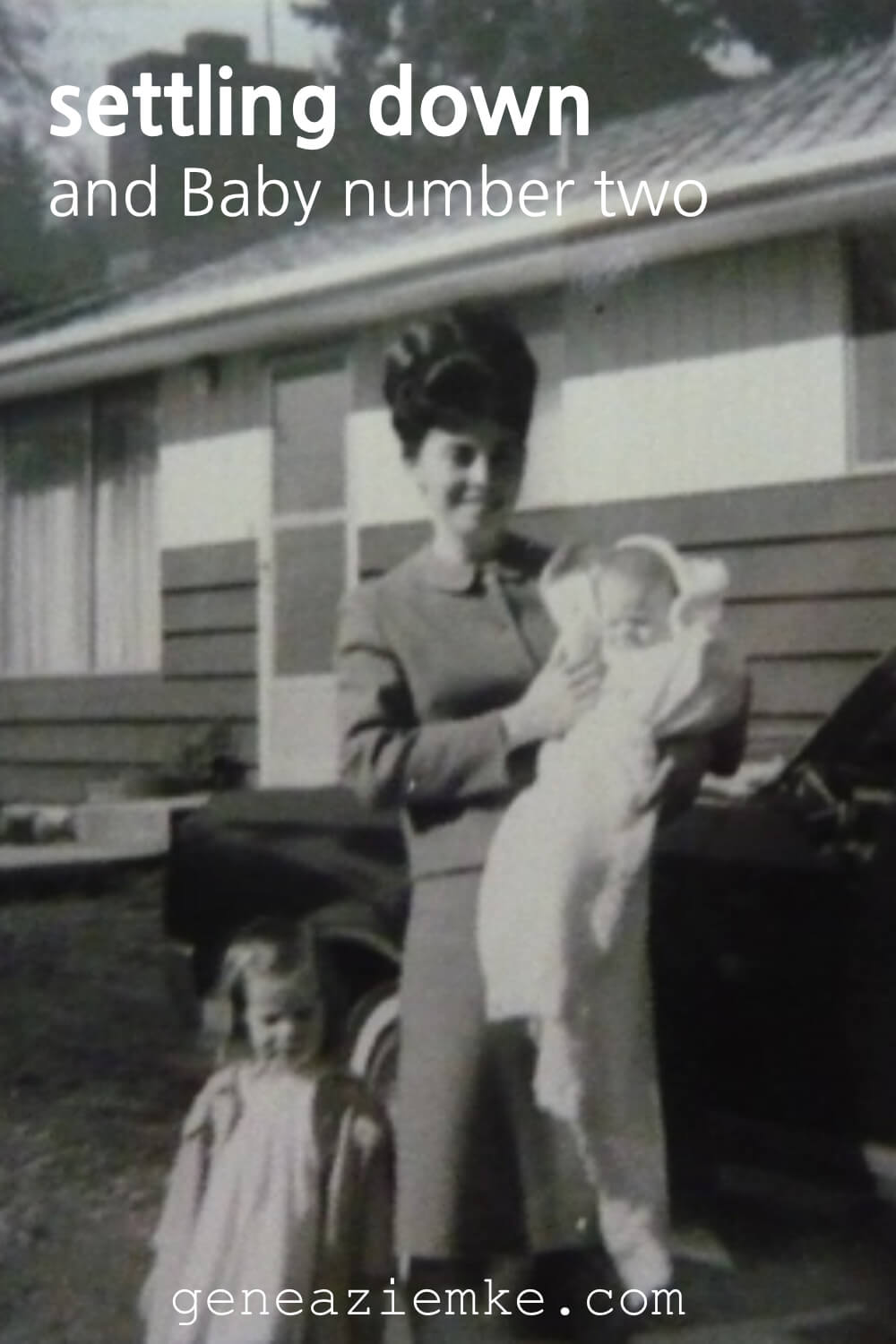 I had such a nice birthday.  Gene got me a bouquet of roses and some kind of white flowers and a box of candy and nice card.

We are with the Hathaway’s in Canada and somehow they found out my birthday was Monday. It was a night off but Sister Hathaway made and decorated a big cake.  About 30 church people came for a surprise party.   Brenda was right there when I opened my gifts.  She could hardly stand it till the paper was off and then she’d go “Ahhh” in a high shrill voice when she saw what it was.

By January of 1966, we’d had enough of the ‘Jolly Green Giant’.  We thought of getting a trailer and pulling it behind a car but ended up just getting an Oldsmobile 98, dark green with air conditioning, and drove it to our next meetings in Canada.  Gene had thought about assisting his former Pastor, Bro. Mitchell, in South Dakota.  Pastor Jenkins, in Indiana, had invited him to come on staff there.  We were getting anxious to settle down somewhere and seriously pursued the thought of moving to Ashland, Oregon to start a church.

Gene had been licensed as a minister right after Bible College.  Now, on May 6, 1966, he was ordained at a District Conference of the United Pentecostal Church in Racine, Wisconsin.

Settling Down And Baby Number Two – 1966

When it was time for Brad to be born, 21 months after Brenda, we knew it would be difficult to continue traveling with two children.  I spent the last two or three weeks of my pregnancy with my parents, on the farm in Iowa, while Gene preached some meetings in Van Wert, Ohio.  While there, he was praying about what we should do and felt he would be getting a call from the Northwest.  In fact, he saw a vision of a man standing in the arched doorway of a church, waving him to ‘come and help us’.  In the next day or two he got a call from Brother Charlie Yadon, on behalf of Pastor Norman Dillon, asking if he would come and try out for the church in Puyallup.  Gene flew to Seattle and was picked up by the Pastor.

When they drove up to the church, Gene saw that same arched entry he had seen in his vision.  He knew this was where God wanted us but he still had to preach there and let the people vote.  It was almost unanimous.  Pastor Dillon said the one ‘no’ vote was from someone, probably an older lady, who didn’t understand.  Gene was bold enough to say, “You can vote how you will, but I know it is God’s will for me to come.”  He felt good about it.

Brad was born at Jennie Edmundson Hospital in Council Bluffs on October 30, 1966. The birth was not nearly as traumatic as Brenda’s had been.  We were still a little short on funds and hadn’t purchased or received a baby book for him but I had a book left over from Brenda’s birth.  Sorry, it was pink…and I used it for him.  The old Iowa Doctor advised that it would be fine to start Brad on whole milk when he was just a month old.  Perhaps that is a reason Brad had allergies that usually bothered him in the spring.

Bradley Gene Ziemke was dedicated at Calvary Apostolic Church in Omaha by Rev J L Tiller.  Great Grandpa Newton Tiller prayed.  I held Bradley with Gene beside me while my Mom held Brenda.

We took a few days to visit Mom Ziemke in Wisconsin and let the relatives there see baby Bradley.  As we sat in her apartment kitchen, above the attorney’s office where she worked, we discussed our move to Washington.  We were sure, but were we really?  About that time, little Brenda went over to a kitchen chair where Gene’s Bible was and opened it.  It wasn’t something she normally did, so I said, “A little child shall lead them”; Isaiah 11:6.  We looked at the Bible and the first words our eyes fell on were: ‘And the people gave a shout, saying, “It is the voice of a god and not of man”.’   Well, even though the scripture was not in context, the words were appropriate as a confirmation that we were doing the right thing.  Back to Mom and Dad’s, in Iowa, we went to prepare a move.

When Brad was about four weeks old, we made the trek to Puyallup.  We left Mom and Dad’s Monday morning, November 28, driving our van with a small ‘National’ rental trailer behind it.  Just as we approached Rawlins, Wyoming, a wheel came off the trailer and rolled on down the highway beside us.  We slowed and came to a stop where there was quite a drop-off and the trailer settled down on its axle.  Whew!  We had to backtrack to Laramie 115 miles to get another trailer and unload and reload right there by the road with the help of a kind old man, Glen Greenwood.  He then towed the damaged trailer for us on to Rawlins.

The trip took us four days.  By Thursday night, we made it to Bonnie and Joe’s, in Portland, and went on to Puyallup on Friday.  Jerry and Kris Dillon had supper for us and helped us unpack our trailer.  We stayed in Pastor Norman and Betty Dillon’s house a few days until we could find a place of our own.  Our first Sunday at ‘Jesus Name Pentecostal Tabernacle’ was December 4, 1966.  Actual installation by Brother Yadon, District Superintendent, was Sunday, January 8, 1967.

A family in the church had just moved to Spokane and offered to rent us their house on Chrisella Road.  It was a nice little two bedroom bungalow with an attached garage.  I liked it a lot and loved that we could see Mount Rainier from our back door. We moved in December 12.   For the first six weeks in Puyallup, it rained every day.  I wanted to paint every room sunshine yellow.  Finally, it snowed. That was so refreshing.