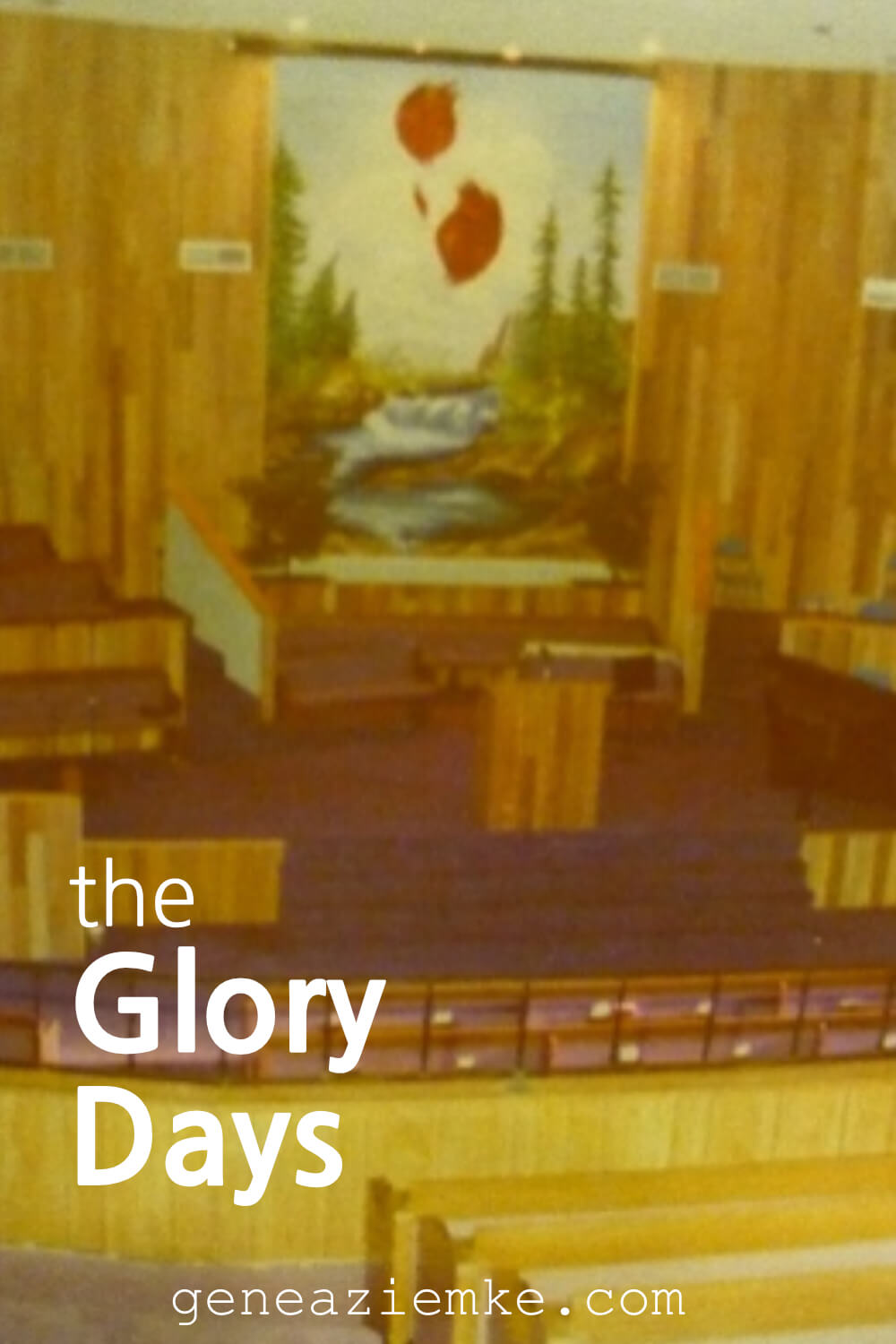 The World of Pentecost at 1818 S Meridian

The church (The World of Pentecost) at 1818 S Meridian was dedicated during Thanksgiving week on Friday, November 23, 1973.  On December 2, our first Sunday service was held there.  We had a police escort, as our congregation caravanned from the old church to the new. Attendance was 236. It was an exciting time. We had been in Puyallup nearly seven years.

Once we moved into our new church building at 1818 S Meridian, we saw great revival.  The baptistery was always ready.  For at least two years, hardly a Sunday went by without some baptisms.  We had a good group of altar workers to pray with folks just coming to God and repenting for their sins, and/or seeking to be filled with the Holy Ghost with evidence of speaking in tongues.

Most of our growth was by people getting saved rather than churchgoers transferring in.  In one series of meetings with Richard Heard, 42 were baptized and 70 received the Holy Ghost.  In fact, according to records kept from November 1973 to when we resigned in April of 1986, there were 1,773 baptisms.  That would average about 150 per year, or 12 per month.

That August, we had an event called ‘Supersonic Sunday’.  It was a take-off of the Boeing Supersonic Transport plane known as the 747.  Our goal was to try to reach 747 in attendance.  We gave away a pony, a bicycle, cassette recorder, and several Bibles and Silver Dollars.  I don’t remember much about the ponies but we had a couple of them at one time and Brenda fed them.

It was a wonderful place to worship.  There were times when a misty cloud appeared and hung over the balcony.  We considered that the ‘glory cloud’.  There is precedent for that in the scripture II Chron. 5:13-14.  It refers to when Solomon had finished building the house of the Lord.  The people were praising and thanking the Lord for His mercy and goodness. “Then the house was filled with a cloud…the glory of the Lord had filled the house of God.”

I posted this at the end of the year in my Daily Appointment Book:

During this last year, the Lord has helped us build a fine edifice to His glory.  Our old church, with a seating capacity of 155 in the auditorium, was over-crowded at the time we moved with an average Sunday morning attendance of 240.  We moved into the new church, seating for 700, on Thanksgiving Day and followed that with a week end of dedication services with Bro CM Becton and a two week revival with Paul and Sharon Haygood. Fourteen were baptized and 11 received the Holy Spirit and many new people have been coming.  Our own little Brenda was baptized and received a refilling during this revival.  She will be nine in January.  Brad just turned seven and Bridget four. There are no more on the way.

At the old church, the staff was limited to the Pastor and Youth Pastor.  All else, including the bookkeeping done by Charlene, was volunteer.  Now that we were in the new building, it was time to get more help.  The first hire was a secretary, Nila.  That helped so much.  I was convinced, and still believe, the first hire in a growing church should be a secretary and next, a janitor.  We also hired Nursery workers during service times, most of whom came from the Seventh Day Adventist church.  They wore a uniform smock, which we felt would be familiar to the children and have a comforting effect.

As the church grew, so did the staff.  Eventually, we had seven full time Pastors.  Rather than increasing our salary and workload, Gene felt it more efficient to spread the work around.  One of the first was David Leonard.

I was still the organist when we moved to the new sanctuary but had been praying hard for someone to take my place.  Someone who really knew how to play. David Leonard drove out to see us in his little yellow Volkswagen.  He was looking to make a move out of Indianapolis, Indiana, where he was one of the main musicians in Nathaniel Urshan’s large church.  I was convinced God sent him.  It was a little difficult for him to make the break with Bro Urshan but he knew he was doing the right thing.  He was great on the organ and I was so relieved.  A few years later, he married Nancy.  She played the piano.

They developed a great choir known as the ‘Sounds of Pentecost’ as well as small groups and soloists.  We were blessed. 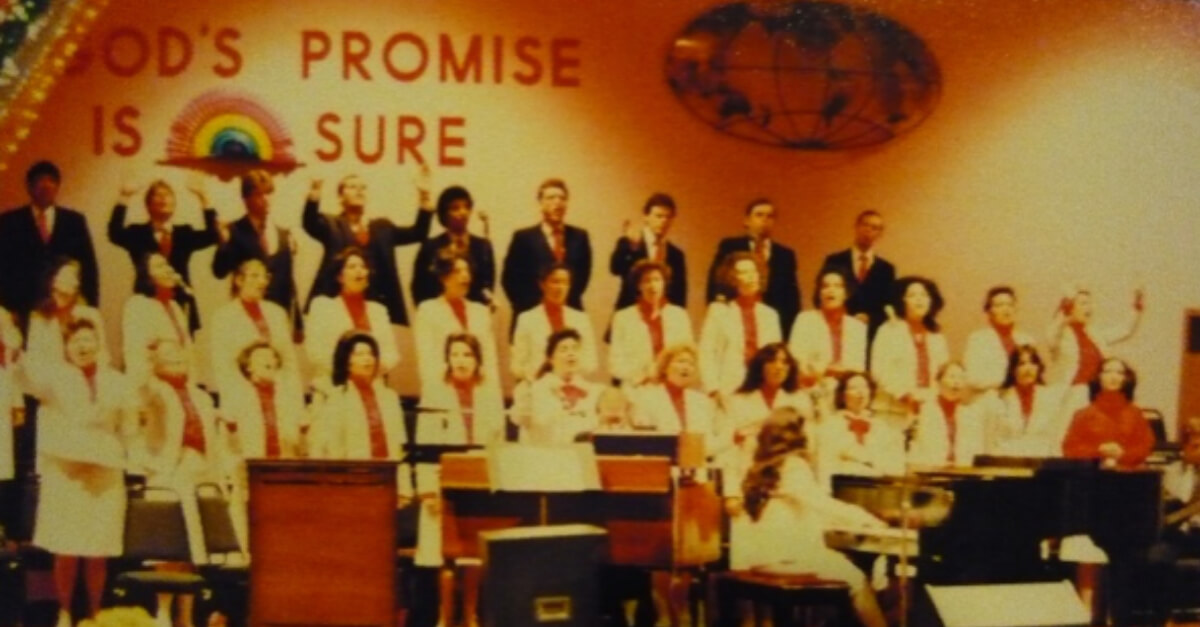 We got a Cruiser bus and had it painted with their name ‘Sounds of Pentecost’ emblazoned on the side.  They not only blessed our congregation but sang in several events around the state such as the Seattle Center, the Bear Festival in McCleary, the Morton Loggers Jubilee, the Washington State Fair, and even as far as the Colville Indian Reservation.  Many years later, they had a couple of Sounds of Pentecost reunions in August of 2002 and 2003.

At the time of our move to the new church at 1818 S Meridian in 1973, Jim Hopkins became Youth Pastor. Later, Ed Wiens came and was responsible for Public Relations (PR), Phil Tolstad ran the print shop, Loren Yadon assisted and led Worship, and David Leonard took care of the music and maintenance.  Soon, Arnie Johnson came on for Finance and later Joe Horan took that over.  Dan and Susanne Flukinger came in October/November 1979.  They worked on a lot of things but primarily in publications.  ‘People Etc.’ became a publication sent out regularly to those on our mailing list.

The church was decorated in blue, purple, and crimson; the colors of the tabernacle as recorded in the Bible.  The walls were light blue.  The Karastan brand carpet in the foyer and sanctuary displayed areas of royal blue, purple, and crimson.  The sanctuary floor was sloped.  A backlit flame above the baptistery represented tongues of fire that were present when the Holy Ghost was first received on the Day of Pentecost in the 2nd chapter of Acts.  A local artist painted a picture of a stream and waterfall around it.

There were stained glass windows in the shape of crosses on each side wall.  The glass was also in the three royal colors.  Back then, the Pastors sat on the platform in specially made chairs.  There was an intercom that allowed the pastor to communicate with the sound booth etc.  The balcony, for extra seating, was most often full.  Stairs were accessible from the foyer but stairs on both sides of the balcony inside the sanctuary made it convenient for folks to come to the altar. 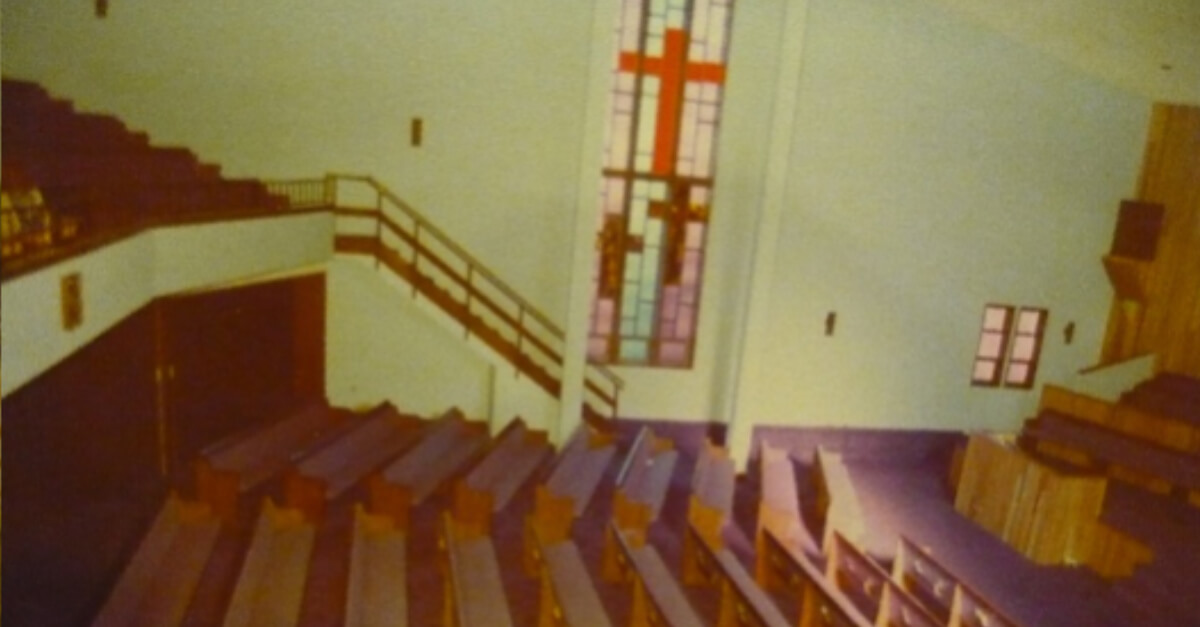 The entry foyer was large, extending the full width of the building.  On the opposite side of the foyer was a nursery, kitchen, fellowship hall, restrooms, and a one bedroom apartment to be used by visiting evangelists or groundskeepers. Dave and Nancy Leonard lived there eventually. A garden room was visible from both the foyer and fellowship hall.  More classrooms were in the daylight basement. 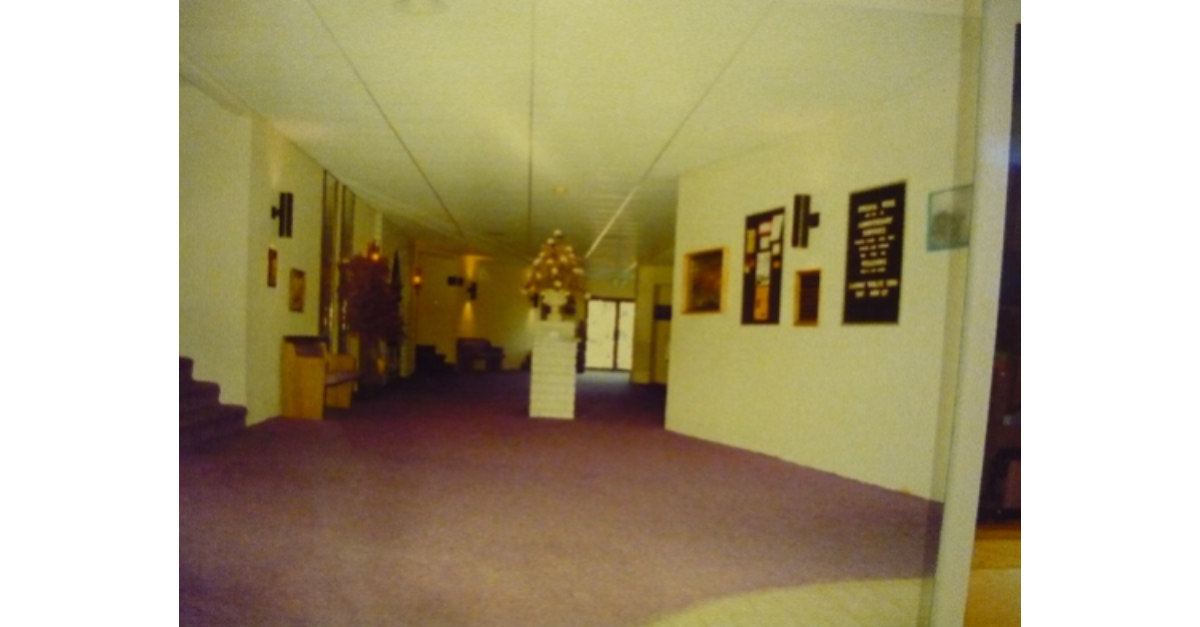 The prayer room extended the width of the sanctuary behind the platform with a door leading to the hall between the sanctuary and the offices.  It was decorated in the same colors as the sanctuary, light blue walls and deep purple, blue, and crimson carpet.  The room was lined with chairs all the way around the walls where folks knelt to pray before services.  It was very well used. A lot of folks prayed a half-hour before every service and at our regular prayer meetings on either Friday or Saturday nights.  A blackboard listed particular requests.  Pictures of the missionaries we supported lined the walls.  There was a focal point with a painted scene of the planets in our universe and a scripture.  In all, the church was 21,000 square feet. 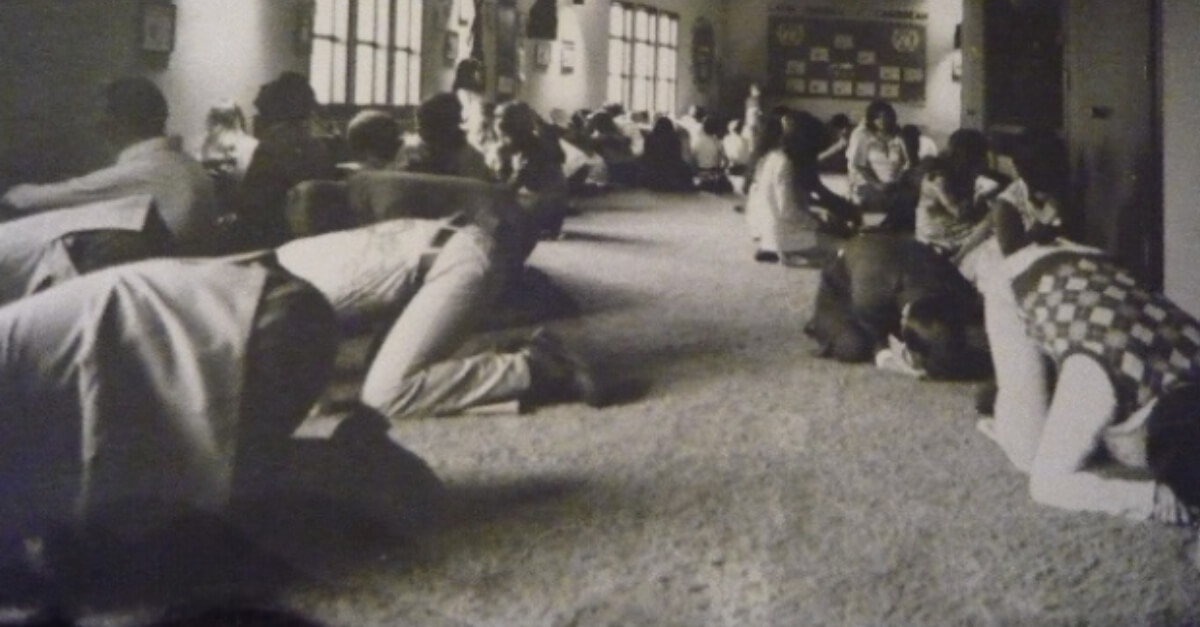 Our church was on the cutting edge for the time in many ways.  We were one of the first to use reverse negative slides (sometimes with picture backgrounds) to display chorus words on a big screen, while churches were still using overhead projectors.  We had one of the first cordless microphones.  Gene tried it out the first time by actually going outside while he preached.  It worked.

Our kids, and some of the church kids, took on the responsibility of changing the church reader board sign. We had applied for and were granted a permit for the sign but, afterward, the Board of Adjustment wanted it removed.  Evidently, they permitted it in error and we were to only have a 1×2 foot sign.  Through appeals, etc., we got to keep it.  We did, however, have to move it back a bit farther from the road. 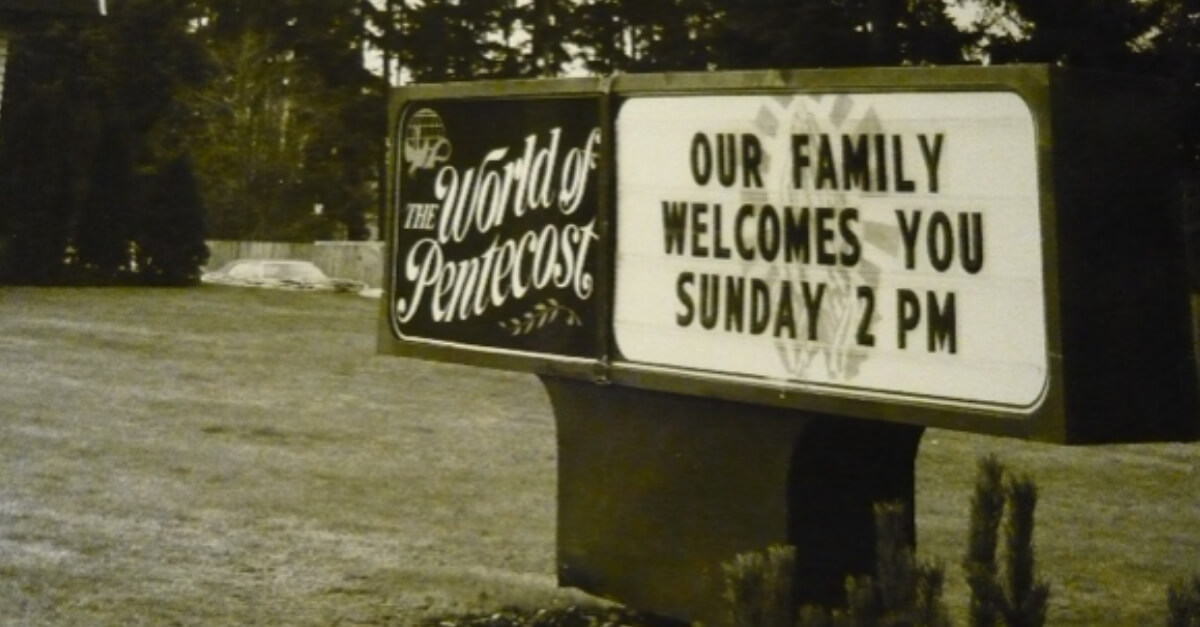 Previous: Keeper Of The Gate