Building The World Of Pentecost At 1818 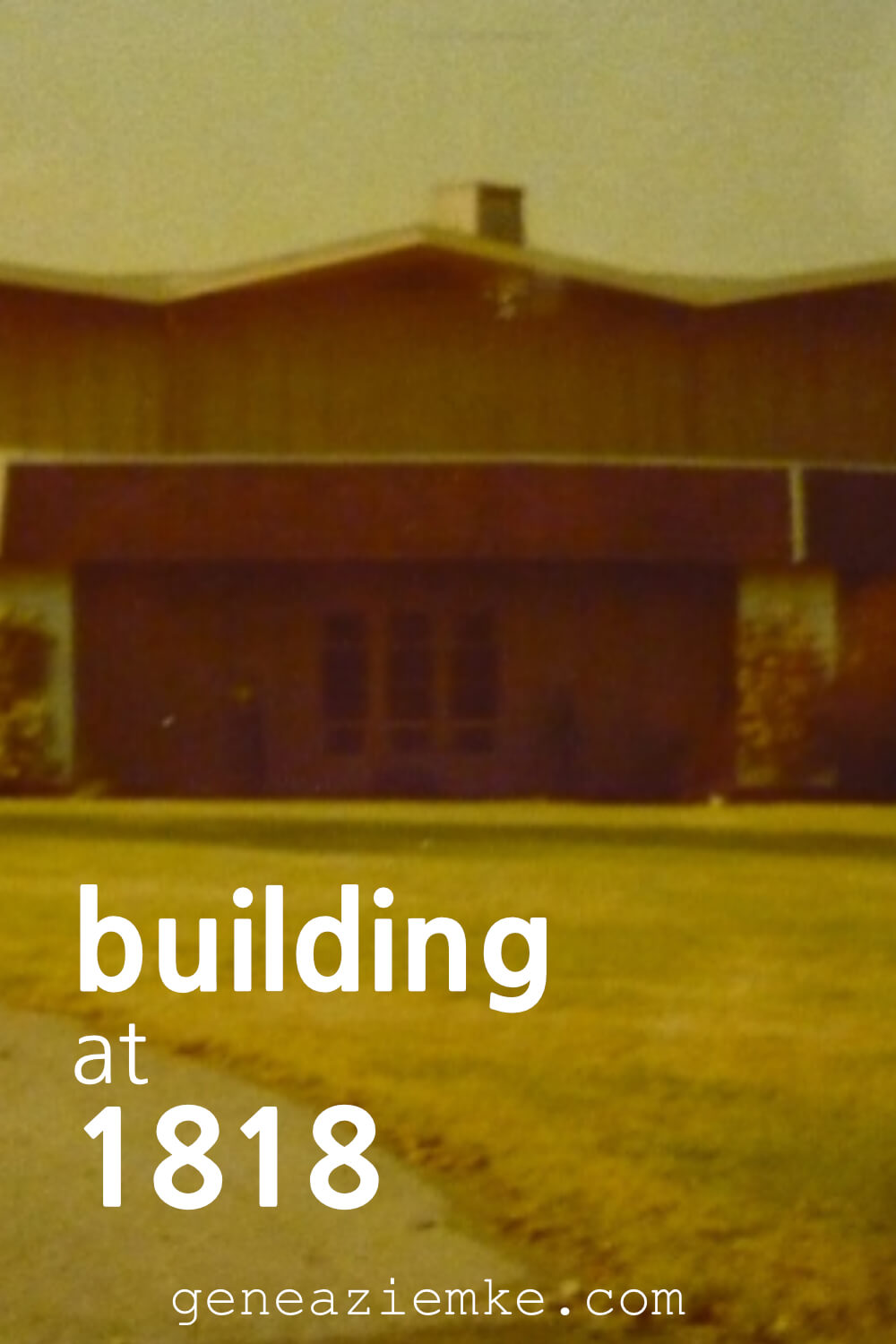 In February, 1973, the loan for the church at 1818 S Meridian went through for $225,000.  We built the new church within seven months with 7000 hours of donated labor.  There were some hired folks too, a foreman, etc., but many of our church men donated their time.

I was the bookkeeper for the $175,000 project.  I guess the other $50,000 was to pay off the land, etc.  We made an office from an old chicken barn behind the house and fixed it up quite nicely.  For three years, we prepared the monthly Washington District UPC Paper from there. I used an IBM Selectric typewriter.  Using the Selectric allowed you to get the right margin even by typing enough slashes at the end of the line to make it fit and then going back to put that many extra spaces between words so that the right margins lined up; a far cry from the convenience of computers today.  Gene had built a ‘light table’ and did the layout for the paper on that, using the items I had typed and clip art and press on letters.  We housed the district printing press and supplies and our own mimeograph (no copiers yet).

I just ran off about 250 copies of Easter invitations for our prospects.  I set it up with the picture and rub off letters on graph paper.  Then took it to the office supply to have an electronic stencil made – brought it home and ran it on the new mimeograph.

I’ve been trying to do some sewing this week for Easter. Just finished my dress.  I had Brenda and Bridget’s done a couple weeks ago and am now working on a pants/vest outfit for Brad.

While Jeff and Frieda lived with us, we butchered the steer we had raised.  We knew you should never name an animal unless it’s a pet.  But Whispy was so named because of a whisp of white hair on the forehead of its otherwise black body.  Now that we had the property at 1818 S Meridian, we wanted to make use of it in some way.  We got a loan and purchased seven calves, three to four months old, for $625.00.  They were on pasture and ‘Growena’.  When they were big enough, we sold all except the black one which we butchered.

The first night I served some of the meat, Jeff put a walkie-talkie behind the dining room curtain and then from upstairs, spoke through the walkie-talkie as if he was Whispy, ”Why did you do this to me…my blood cries to  you from the ground”.  Bridget already didn’t like meat too well.  From that moment on, she decided to be a vegetarian.  The last things she gave up were McDonald’s hamburgers and Arby’s roast beef.

Ira Washburn was the architect for the beautiful church we would build.  With overflows and balcony, technically it would seat 582; with choir and orchestra, 40 more.  However, we could easily fit 700.  The bookkeeping job was time consuming and a challenge for me.  There was a lot to keep track of as supplies were delivered and salaries paid, more draws made on the loan, etc.  I told God if He helped me to make it come out right to the penny, I’d never take another bookkeeping job again.  He did. Whew!  There were many and varied stories about the construction: the time the crane tipped over, the worker who fell from the high beam, etc.

It took one third of the construction time to do the ground work and pour the foundation.  The next third was framing it in, dry walling, electrical, etc. The final third was the finish work.  During excavation, a large rock was found and had to be dug out about where the pulpit would go.  Gene asked them to save the rock and move it next to the road between the church and house.  We named it Ebenezer “Hitherto hath the Lord helped us”. I Samuel 7:12 Then Samuel took a stone, and set it between Mizpeh and Shen, and called the name of it Ebenezer, saying, Hitherto hath the LORD helped us.  The rock is still there today.  Life was busy then but we loved it.

Our men donated approximately 300 hours a week on the construction.  Sometimes friends from other churches around Washington would donate time in the area of their expertise and stay in our home for a few days.  The first week of construction, I provided food for the workers.  After that they brought their lunches and we just provided coffee and snacks for break.  The main volunteering day was Saturday. Ladies brought lunch or sent it with their husbands.  Hot dishes, salads, and desserts were served in the classroom adjoining the office behind our house.

While the men were working on the church building one evening, they got a call from a young man asking for help.  He was calling from the phone booth by Safeway on Meridian.  Cecelia Clifford, one of the former hippies that had gotten saved, had met him and given him Gene’s number ‘in case he ever needed help’.  A couple of the men accompanied Gene to pick him up and bring him to our house.  His name was Danny Dillon.  He was a drug addict ready to quit.

I called the hospital about what was best to do for him and was told to give him orange juice and let him sleep.  Before he went to bed, Gene asked him for the hunting knife he had in his boot.  He stayed a few days, gave his heart to God, and was counseled to call his parents, who had no idea where he was.  Our church took up a collection and bought him a bus ticket back to West Virginia where he was from.  He was facing an arrest on drug charges there.  He did go to prison for a few years but was ministered to by a church and kept his walk with God.  Later, he married one of the girls from that church and, together, they did a lot of work among the youth.  We kept in touch with him through the years.  By the way, Gene still has the knife.

In August of 1973 we took a family trip, with the Sargent family, to Iowa for Ron and Cindy’s wedding. Sightseeing along the way, we went to Frontier City in Montana, Mount Rushmore, the Passion play, the Cosmos, Keystone, the Wax Museum and Reptile Gardens.

Previous: Give Me A Man

Next: Keeper Of The Gate