I liked Donald Duck’s rich Uncle Scrooge in the comic books.  I took all of my money and bought a roll or two of pennies to try to act like Uncle Scrooge, who was always sitting in a pile of gold coins.  But 100 pennies didn’t go very far.

My cousins and I were always trying to figure out how to make extra money; so one time we decided to put on a circus down at Dallas and Nipper’s house.  I was the monkey who climbed the tree and threw out candy.  I think we lost more money than we made.

We lived one block from the Railroad. I set up a lemonade stand by the Union Grove Lumber Company while workers were unloading lumber from the train.  I also rummaged through the village dump for aluminum cans and pans to sell.

Racine County Fairgrounds was just outside Union Grove.  I knew the kids whose dad managed the grounds keeping and worked with them to make a little extra money during the county fair.

While living above the B & B, I built a chicken coop on the back porch (which was on the roof of the store) and raised chickens to sell as fryers, again trying to make extra money.  I used a jigsaw to make knick-knack shelves shaped like a crescent moon.  I think only my friends bought them.  Aunt Eleanor had hers for years.  I also built a miniature barn.

As a young teen, one summer I worked on a dairy and chicken farm for Harry and Hedvig Ruff.  In my young mind, I thought there were 10,000 chickens, but there might have been 2,000.  I fed the chickens, gathered, lighted, and sorted eggs, and helped pluck feathers when the hens were butchered.  I don’t remember being paid but probably got board and room and spending money.  I learned to drive a tractor there.

One day Harry asked me to go out in the wooded pasture to find a newly born calf.  I found it and tried to prod it along to the barn with the cow following.  I didn’t realize the bull was around.  He stared at me and then started toward me.  Scared out of my wits, I ran and, unfortunately, headed for the farthest fence. Never looking back, I rolled under it, safe!

Just a couple of buildings down from the B & B was Rammelt’s Tavern.  One day after hearing some drunks there the night before, I noticed coins by a big puddle of water.  I started to search around in the puddle and came up with what I considered a lot of money in change.   That’s probably why, to this day, whenever I’m walking my eyes are focused on the ground, looking for money.  I pick up even a penny.

As a teenager, I washed windows and sorted and organized crates of food, both at the local Callen’s Restaurant and the B & B Market.  I also diligently did yard work and clean-up for an elderly widow who lived across the street behind us.

I watched my Dad make extra money building 2-wheeled trailers to sell and going to farmers to collect old machinery, copper, aluminum, and so forth to sell.  We built a bonfire to burn the insulation off of the copper wire so we could sell it.

I attended elementary school, grades 1 through 8 and then Union Free High School, graduating in 1958.  The High School had a total enrollment of about 350 students.  Don Ellis, Tom Moyle, and Rich Colby were close friends.  Tom was in an accident on a Highway C curve and died.

In those days our church taught us not to attend movies. Just one time I went to see Br’er Rabbit with Rich Colby.  I felt so guilty afterward, although I did enjoy the movie.

When I was 10 or 12, I went to Camp Anokijig, a YMCA camp, for a week. It was my first time away from home.  I learned how to make a wooden bow with arrows and to play archery golf.  We sat around the campfire at night and sang songs and listened to the camp speaker.  One night they had us sing “Oh Wa Togoo Siam” until we could figure out what it was (“Oh what a goose I am”).

In 8th grade, I was Salutatorian and gave a speech at Baccalaureate at the Union Grove Methodist church.  Our class slogan was, “Forward ever, backward never”. That was when Uncle Bob and Aunt Eleanor gave me a brand new Mossberg Shotgun -16 gauge – 3 shot bolt action with a Polly choke.  I still have that gun.

For a season in high school, I was the only spirit filled Christian there and often received chiding, especially from what was supposed to be a good Baptist boy.  In those days, Christians didn’t go to the dances, so I sat out dancing classes in the study hall.  I went out for track and ran the 440.  Other than that I was not a sport jock.  I spent my time striving to be a good student with a high GPA.

I’ll never forget an incident in my senior year. My home room teacher had our class do an aptitude test.  In going over my results, she remarked I rated highest in ministry, forestry, or social work.  Even though I knew God had tugged on my heart, I immediately said to her, “I’m for sure not going to be a Pastor”.  (Here I am, having been in the pastoral ministry for 52 years.) 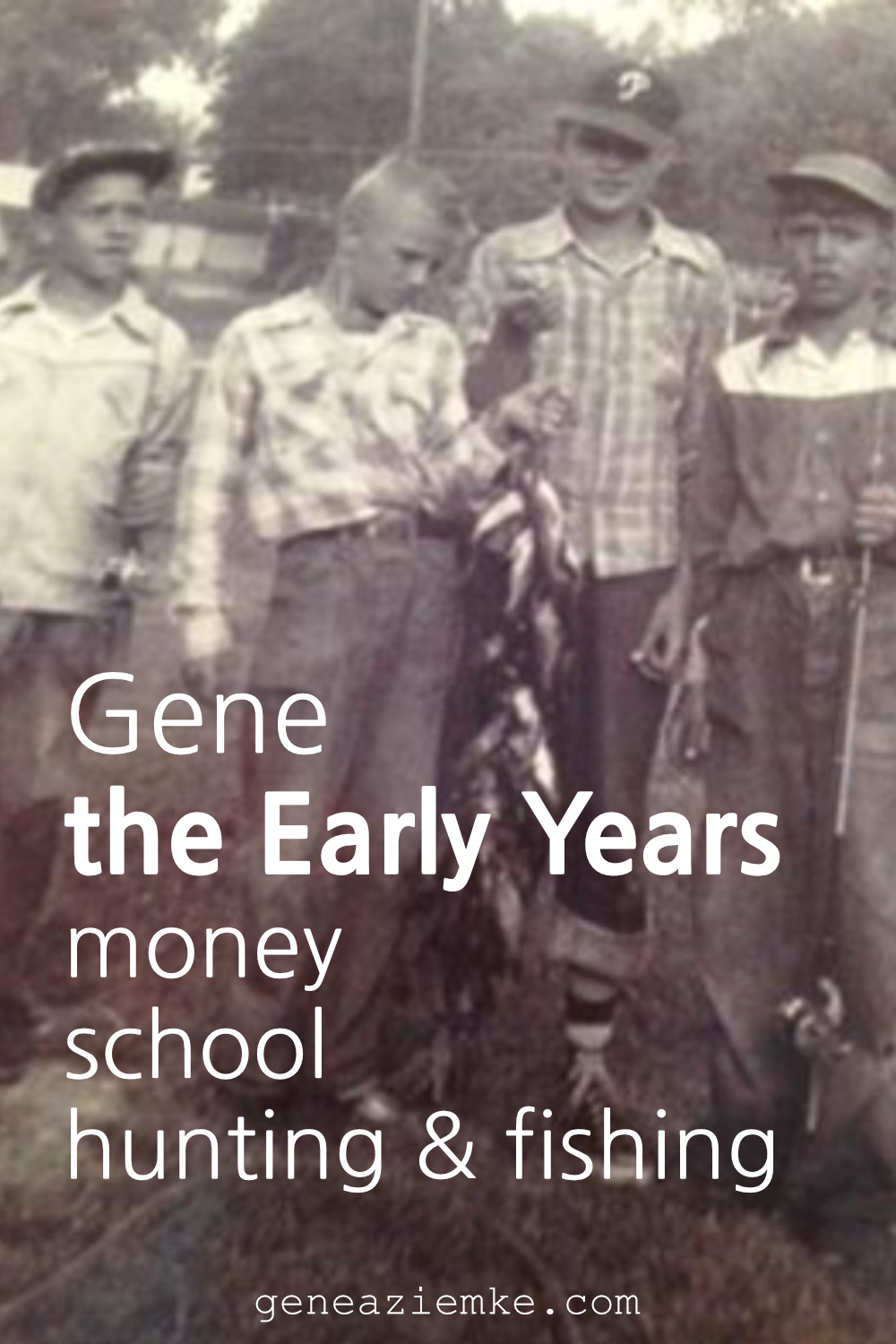 My passion as a child, with my many cousins who lived in the area, was hunting and fishing.  The fishing was mostly at Eagle Lake where Uncle Bob and Aunt Eleanor lived.  I babysat their two boys, Bobby and Billy, on many occasions.  This  gave me the opportunity to learn hunting and fishing from Uncle Bob. He had given me the shotgun as an eighth grade graduation gift and I’d had a 22 single-shot rifle as far back as I can remember, probably age 12.

I was so fascinated with hunting that I took my gun to my Grandparent’s house on the way to high school, so that as soon as school was out,  I could run down the hill a couple of blocks, grab my gun, and head out to the Ketterhagen and Lincoln Woods to hunt.

Uncle Bob set out decoys by his duck blind on Eagle Lake.  I took my shotgun and went with him before light some mornings.  He called the ducks in with his “duck-call” and we sat in the blind waiting for them to fly overhead.  When we shot one, his dog retrieved it.  I no longer hunt ducks but have a nice decoy collection, including some from Uncle Bob, in memory of my childhood pursuits.

Later I had a variety of shotguns and loved to hunt ring-neck pheasants, ducks, geese, rabbits, and squirrels.  I even took up bow-hunting for deer outside of the Necedah Wildlife refuge and Eagle River with my uncles, and duck and geese hunting at Horicon Marsh.

During the winter, we loved to go ice fishing at Eagle Lake.  We chopped through six to eight inches of ice with a special chopper (a long heavy metal pole with a chiseled edge) and put a tip-up in the hole.  When a fish bit, a flag would fly up. While walking toward the middle of the lake one day, picking up and dropping the chopper as I went along, I inadvertently let it come down on my left foot.  It chopped through my boot to my little toe.  I still have a callous there to this day.

Once when ice-skating on Eagle Lake and racing my cousins toward Gitsloff’s Resort, tavern and restaurant, I looked toward shore and saw a mound in the ice.  Before I could stop, I went into the water and clung to the edge of ice.  My cousin Nipper (his real name was Vermont) crawled on his belly to me and grabbed my hand to pull me out.  That was my first bad lake experience.  Later in life I had another one.

Next: On The Lighter Side