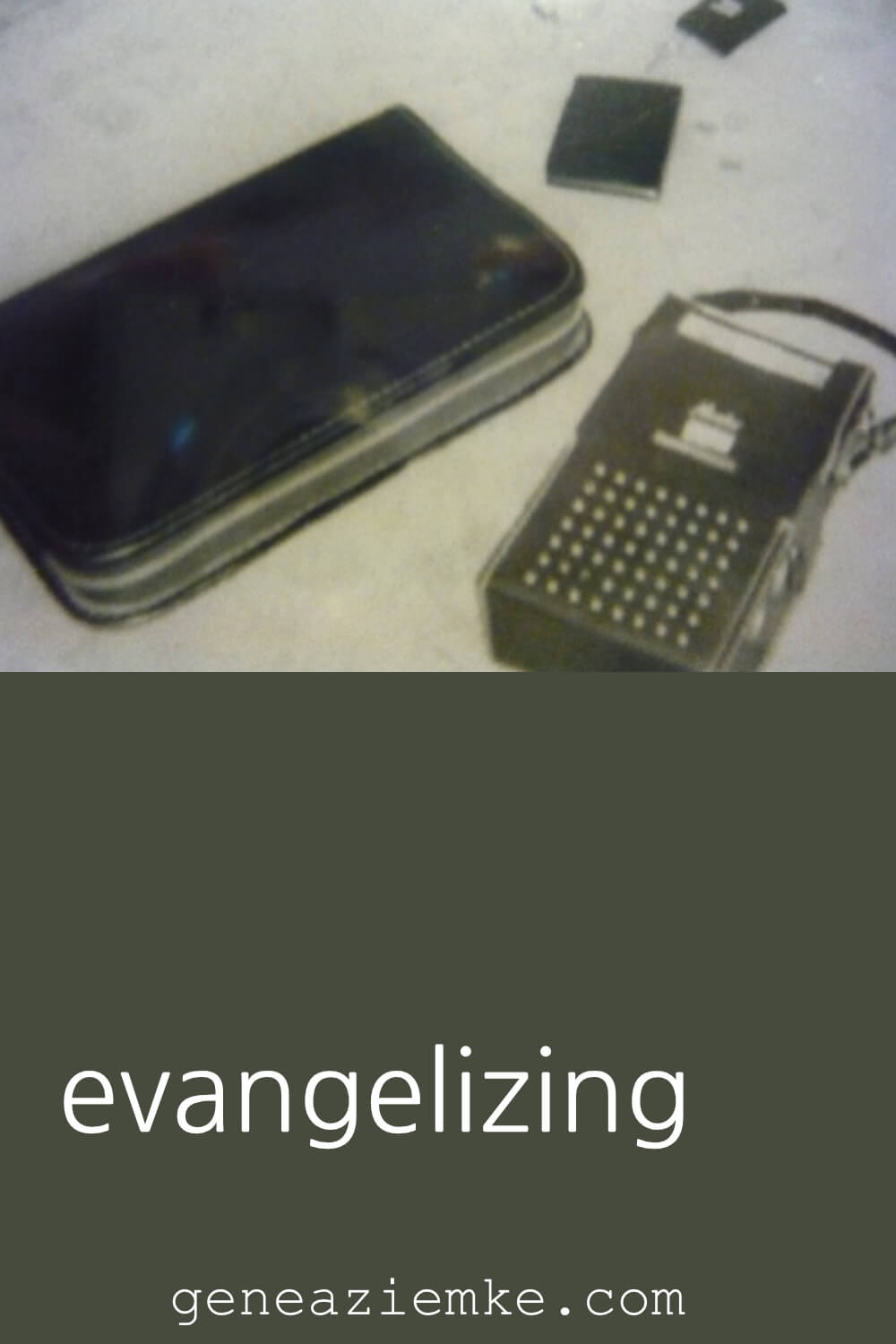 Gene hoped we could be more musical in our evangelistic efforts, so we purchased an accordion for me and an electric guitar for him.  He took lessons for a while but never really learned to play.  (He ended up selling it to the Pastor of the church in Peru, Indiana when we had services there.) My limited piano ability helped with the accordion.  A few lessons and I was ready, at least haltingly, to play in two keys, plus the key of G.  We practiced and put together song books.  Gene sang lead and I sang alto.  For those days, and the places we ministered, it was probably appreciated.  Though not professional, the message of the songs was anointed.

It took us about three months to get started evangelizing.  Gene’s home church Pastor from Bethel Tabernacle in Racine, Wisconsin invited him to hold a meeting.  In general, it was good but not greatly successful in light of salvations.  Gene got involved in selling Hammond Organs and Amway products for a few weeks to try to tide us over.

In November, Pastor Benjamin Urshan in Clintonville, Wisconsin asked us to come for a revival.  We enjoyed being in their home.  The services were not fantastic, but good.  One morning, we awoke overhearing Pastor Urshan on the phone downstairs.  He was calling a Pastor friend recommending us as evangelists.  “This young man is not a novice”, he said.  “You pray about it and I think, if you are ready for a meeting, this young man will do you good.”  The next day, Pastor Robert McFarland called back and said he felt it would be the Lord’s will for us to come and preach a meeting in his city.

On to Marion, Indiana we went.  This was, for the time, a good sized church.  Several were baptized and received the Holy Ghost in that meeting.  We were there for two weeks.  The church was so big and neat. The people were so friendly.  The Pastor’s wife treated us royally and the church people brought baked goods in abundance.  We were there when we heard the news of John F Kennedy’s assassination in November, 1963.  It was a fateful day for the nation.  We felt it was a fateful time in our lives as well, but for the good.

Pastors around heard of the revival and we began to get more and more invitations.  From that time on, for the next three years, we were in church, somewhere, every night except Mondays, Christmas, and General Conference times.  Meetings ran from one to four weeks, depending on how well they were going.  It got to the point that if we didn’t have church one night (Mondays) we felt a bit nervous.  Otherwise, between meetings, Mondays were our travel days.  Sometimes we didn’t know where we would be the following week but, before the time came, God had opened a door.  We spent quite a bit of time in Indiana and Illinois in the Midwest, then into Ontario, Canada and the West Coast.

Our second wedding anniversary found us in Twin Falls, Idaho.  It was a beautiful Tuesday.  Gene went fishing in the afternoon with the Pastor, Brother Chandler.  Sister Chandler served us a fine chicken dinner. We had church in the evening.  After service, we went with friends to the Depot Café for hamburgers.  When we got back at 11:30 p.m., I gave Gene his gift of cuff links and a tie tac in music symbol design and a travel log.  He gave me three pretty hankies and three pairs of nylon stockings.

We held meetings at Uncle Kirby’s church in Bloomington, Indiana, a couple of times.  At a Friday night Fellowship meeting, when churches in the area came together, Gene preached a memorable sermon.  Part of it was from II Corinthians 5:1-2; For we know that if our earthly house of this tabernacle were dissolved, we have a building of God, an house not made with hands, eternal in the heavens.  2 For in this we groan, earnestly desiring to be clothed upon with our house which is from heaven:  He went on to describe how we are still in our mortal bodies by walking across the platform, slamming into the wall, and then groaning.  I heard a preacher say, “and we thought we could preach”.

Uncle Kirby’s church had an upstairs apartment for visiting guests or evangelists.  Aunt Virginia told me it needed to be cleaned but that we could stay there.  I scrubbed the floors, and cleaned it all thoroughly, even using the old, heavy, Kirby Vacuum.  It was a very comfortable place to call our own for the time.  There was a separate bedroom and bath plus a kitchenette open to the living room.

A couple of the church girls came up to the apartment and we would work on our hair together.  All of the Pentecostal girls wore their hair up and sprayed it heavily to last a few days, then wrap it with a sheer scarf before going to bed each night.  Sometimes they put a filler in to attach the hair to and make it bigger.  I asked Dalana what she had in hers.  She simply answered, “a can of hair spray”.  Not literally of course, but she probably used most of the can.  Some of the hairdos looked like they had half an oatmeal box inside.

Uncle Kirby liked to go out for breakfast and Gene often accompanied him and was mentored a bit by him.

We became acquainted with Steve Smith, a young man in Uncle Kirby’s church.  He was the pianist and a very good musician.  Later, he moved to Indianapolis for college and become one of the main musicians in the large church there, pastored by Nathan Urshan.  Steve was a contemporary with David Leonard, who played the organ at Urshan’s church.  Steve became an accomplished song writer in Christian circles.  One of his most well-known songs was “Daystar”.  In 2012, when he died of complications of diabetes, his recording of that song was played at his funeral.

While there in Bloomington, we also met a bouncy teenager who led a great children’s choir.  Her name was Brenda.  Thus, we got the name for our first child.

When we were evangelizing in Idaho, Conquerors Bible College staff asked if we would be willing represent the college in several cities. We drove to Portland, received our itinerary, and started traveling for the Bible school on July 6, 1964.  We would put up a display and Gene would preach and answer questions about the school at the end.  We finished by October and met Brother Gleason and Brother Judd at General Conference in Texas to go over our financial report.  They paid us enough in addition to get back to Portland where we had started from and seemed pleased with what we had done.

From conference, we went to Pennsylvania.  The Pastor from Wormleysburg actually rode with us the 1800 miles from Texas.  Then on to Brockville, Canada, to be with Ralph Reynolds.  A full list of our evangelistic travels is found in Exhibit 3 in the back of this book.

We saw Niagara Falls from the Canadian side.  We toured Gettysburg and learned that the Battle of Gettysburg began because the Confederate Army was in need of shoes and were coming north to get them from that town.

We stayed in a variety of places, from Pastor’s homes, to church classrooms, or church apartments.  Many times we had to clean the place before bringing our things in.  I scrubbed many floors and cleaned up mice droppings.  At one place in California, the Pastor brought us to his lovely home and showed us around.  There was an empty bedroom since his daughter was off at college.  Then he took us to the church where we had to clean a classroom to stay in.  It was a bit disappointing but we didn’t complain.  At most places, it was kind of fun to go into the room assigned us and try to make it look like home for a couple of weeks.

One of the best places was with the Crossleys in Walla Walla, Washington.  Tiny Crossley had two little girls and two little boys.  She loved to dress them in matching outfits and always had some special bow or barrette for the girls’ hair and ties for the boys.  Part of the reason I liked being there was because there was no doubt of what I should be doing. Tiny gave me jobs in the kitchen for meal preparation, etc.  I always tried to help, wherever we went, but wasn’t always sure what the pastor’s wife wanted me to do.  I had sewn a new brown dress for myself and Tiny let me know it wasn’t a good color on me.  It was blunt, but I was thankful to know. 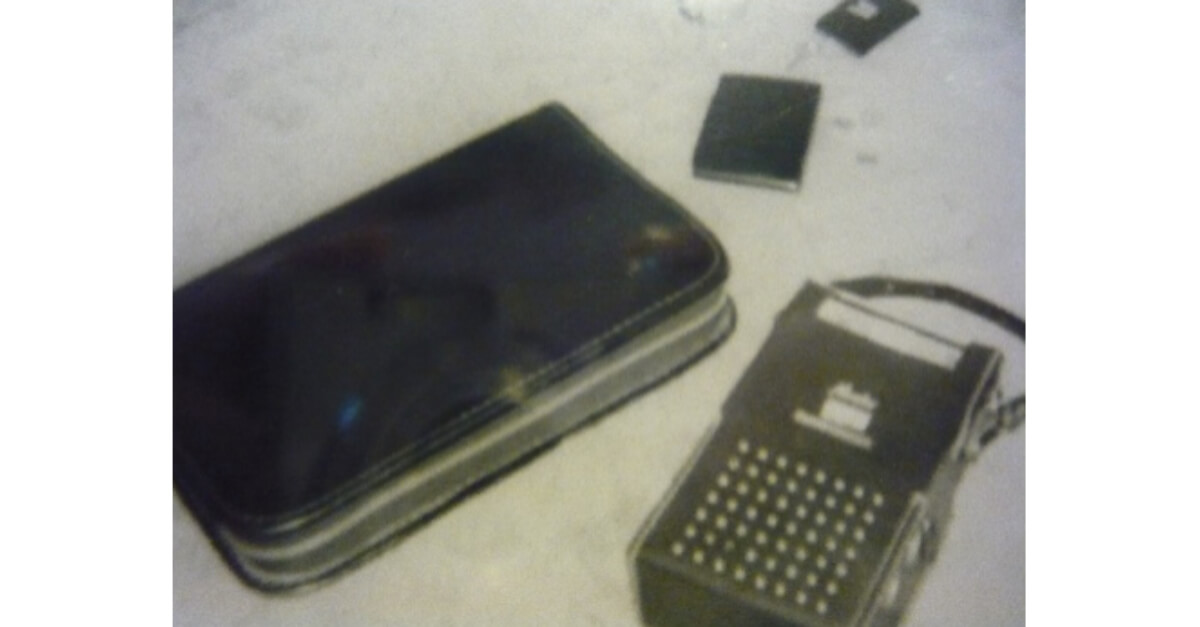 At one of those places, Gene laid out on the bed a representation of all he owned: the keys to the car, his Bible, tape recorder, and money clip. He took a picture of them.

In the spring, after we had been traveling for several months, I found out I was pregnant.  We were back at Gene’s home church for a meeting and they took up an offering for me to buy a sewing machine.  I got one on sale for $88 and started making my own maternity clothes.  That is the machine I still use 50 years later.  It outlived two portable cases and eventually became housed in my Mom’s old sewing machine cabinet.

More travels and then back to Wisconsin the first part of January to await the birth of our first baby.  I had been there often enough to have pre-natal appointments with Dr. Headeke in Union Grove.  He delivered our baby free of charge, because we were in the ministry.  We just had to pay the hospital.  The church ladies in Racine gave me a baby shower.

I stayed with Mom Ziemke while awaiting baby Brenda and Gene went on to preach a revival in Greensburg, Indiana.  Mom Ziemke worked for an attorney and actually lived in an apartment above his office.  For a couple of weeks, I was privileged to work a few hours a day for him, typing and figuring farm schedules for tax time.  It was kind of fun.  Coming from the farm helped me many times when I came across bad penmanship.  I could tell what it was supposed to be by experience; lists of machinery, cows, etc., depreciation and figuring the farmer’s profit or loss.

Next: The Bionic Message